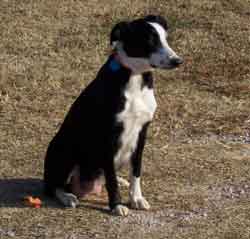 Alexander McNab and his family left Glasgow Scotland in 1868, came to the United States of America and settled in California on a ranch known as the McNab Ranch in Mendocino County south of Ukiah.  In 1885, Mr. McNab returned to the Grampian Hills in Scotland for the sole purpose of getting some of the Fox Shepard dogs he was used to working.  These two dogs he imported were bred to select Shepard females of Spanish origin, which were brought to this country by the Basque sheepherders, and that cross was called the McNab Shepards because Mr. McNab perfected this breed of Stock Dog, which will head or heel.

The McNabs appearence can vary but they are often predominantly black with white markings — white muzzle with a white streak running up the head between the eyes, usually a white neck and chest, white tipped tail and one or more white feet. They weigh between 40 and 70 pounds. Some have natural bobtails and others have long, narrow, short-furred tails. Its ears are medium sized and are usually pointed but some will flop over at the top. The coat is always smooth or short. 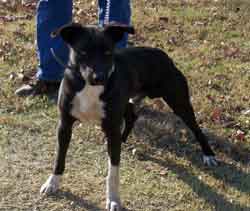 As for working ability, the McNab is very cat-footed, very fast and agile. He generally is a more forceful stockdog than the Border Collie, not as excitable as the Kelpie, and not as strong minded as an Australian Cattledog. He is very easy to teach, giving you his alert attention and complete loyalty. McNabs often bond tightly to their family members, including other household pets. They have a keen sense of territory and seldom wander away from home. They are also more likely to defend their territory and family members than many of the more sensitive herding breeds.